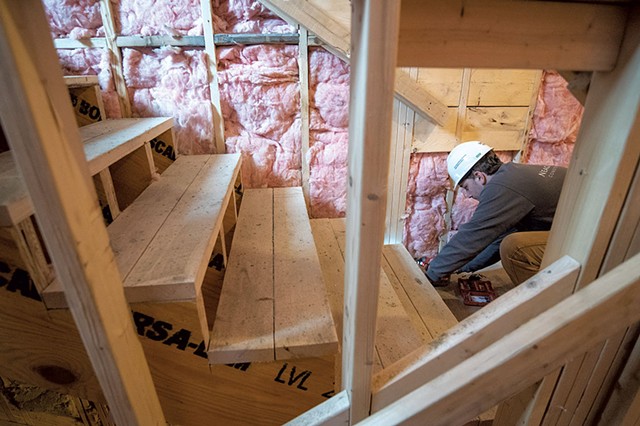 When residents of a new apartment building in Morrisville turn up their thermostats this fall, the warm air that flows into their bedrooms will be some of the cleanest heat produced in Vermont.

Superefficient electric heat pumps, working like refrigerators in reverse, will draw heat from the air outside and pump it through ceiling ducts to keep each room toasty.

And since the fuel will include locally generated electricity — such as hydro and solar — instead of imported fossil fuels, carbon emissions from the building will be virtually nonexistent.

That’s a benchmark that climate activists say all new buildings should strive to achieve if the state is going to reduce emissions from heating homes and businesses, which account for about a third of Vermont’s carbon pollution.

It’s a goal the Lamoille Housing Partnership, owner of the 24-unit Village Center Apartments project, took to heart when its leaders began designing the building two years ago.

“Energy efficiency and sustainability are built into our mission,” said Jim Lovinsky, the group’s executive director. “If this building can prove itself like I think it will, it’ll be a great step forward.” 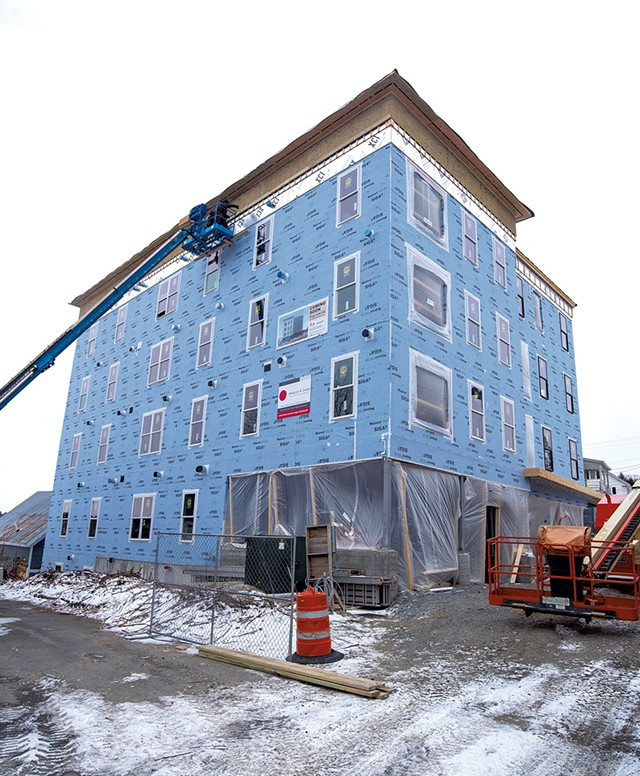 Meanwhile, 25 miles to the west, a new apartment building under construction in Colchester will also be built to airtight standards, with well-insulated walls, double-pane windows and seams scrupulously taped to prevent air leaks.

But there’s a key difference: The 36-unit Stuart Avenue Apartments, owned by Champlain Housing Trust, will be heated by a fossil fuel — natural gas.

The relatively low price of gas and easy access compared to other fossil fuels, such as propane and heating oil, made the heating decision an easy one, said Kathy Beyer, senior vice president for real estate development for the affordable housing developer Evernorth, a partner in the project.

For an organization under intense pressure to build housing as quickly as possible amid soaring costs, the cheapest heating option was the developers’ only real choice, Beyer said.

“Our mission is to build more housing, I’ll be very honest about that,” Beyer said. “If our operating costs are going to go up, it means we’re going to build less housing.”

As the state races to build its way out of the housing crisis, much new construction is still incorporating fossil fuel heating systems. That’s a big problem, clean energy advocates say, because it adds to a carbon footprint that Vermont must drastically reduce.

“It’s really unfortunate that this is happening,” said David Farnsworth, a principal with the Montpelier-based Regulatory Assistance Project, a kind of clean-energy think tank.

New buildings can be designed to meet super-low or even net-zero standards, but without intervention by legislators or regulators, the low cost of natural gas will likely continue to act as an incentive for developers to choose fossil fuel heating systems, Farnsworth said.

Cleaning up the heating sector was a main goal of state lawmakers this year, but it didn’t go as planned. A bill that would have created a clean heat standard requiring fuel dealers to decrease the amount of fossil fuel they sell over time, or to offset those sales with insulation projects or cleaner heating options, was vetoed by Gov. Phil Scott. Lawmakers narrowly failed to override the veto in a vote that disappointed many lawmakers and environmental advocates.

In the absence of state or local regulations, developers will continue to make decisions based on their own priorities, whether that’s building as much affordable housing as possible or building homes to sell at profit, Farnsworth said.

“So year in, year out, you’re building stuff that is not as low carbon as it might be,” he said. “It’s a big challenge.”

Beyer chafed at the suggestion that new fossil fuel-powered buildings are part of the problem.

Modern multifamily apartments are some of the most energy-efficient buildings in the state, she said. Their compact footprint and use of the latest building materials and techniques mean tenants have extremely low carbon profiles.

In addition, such projects are often located close to downtowns and village centers, which means tenants can reduce or eliminate commutes.

The Stuart Avenue Apartments in Colchester are tucked into a new development along Route 2 called Severance Corners. While not near any historic town center, the area has long been designated for growth and is served by a bus line, Beyer noted.

She argued that focusing on the carbon produced by the state’s limited stock of new buildings ignores a much larger opportunity to reduce emissions by upgrading existing homes and buildings.

“If you really care about climate change in Vermont, the biggest bang for your buck is going to be to weatherize these old buildings all around the state,” she said.

Officials are aware, and they just allocated $80 million in this year’s budget for the efforts.

The push for net-zero new buildings is nevertheless strong and growing nationwide.

Burlington is at the forefront of this “electrify everything” movement. The Queen City approved a charter change on Town Meeting Day last year that allows the city to create rules discouraging new buildings from being heated with fossil fuels. Fully electric or renewably powered buildings would get a pass, but those using fossil fuels would have to pay a carbon fee based on their lifetime emissions. Voters would need to sign off on any such rules. 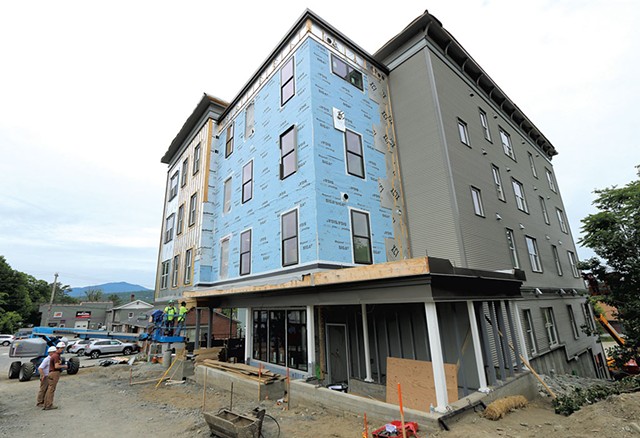 Lovinsky, of the Lamoille Housing Partnership, said his organization incorporated significant alternative energy features into its projects even before the Morrisville complex. This included the installation of 15 highly insulated all-electric Vermont-made modular homes called Vermods that are outfitted with solar panels.

Some of its projects have also included wood-pellet boilers alongside existing fossil fuel burners. This allows buildings to be heated with locally produced pellets, keeping more money in the local economy, he said.

In the partnership’s Morrisville building, natural gas wasn’t an option because Vermont Gas Systems doesn’t serve the town. Propane, which has to be condensed and transported by truck, is far more expensive, and oil burners and tanks would have taken up valuable space.

By getting rid of the fossil fuel systems entirely, the first floor of the five-story Village Center Apartments building can now accommodate two additional units, Lovinsky explained. In addition to providing more housing, that’s a long-term revenue stream that helps the project pencil out.

Also helping is the ability to put solar not only on the roof but on two other buildings the nonprofit owns in downtown Morrisville. When all those panels are combined, they’ll meet about 35 percent of the new building’s electrical demand.

One way to keep that demand low is to superinsulate the units and keep air leaks to a minimum, explained architect Sam Ostrow of Vermont Integrated Architecture, which designed the building.

During an inspection of one of the units last week, Ostrow explained that something as small as how a worker tapes a corner seam during the installation of a window can vastly improve energy efficiency.

“Every joint is taped like you wouldn’t believe,” Ostrow said.

In an unfinished corner closet sat the heart of the building’s heating and cooling system — a cold-climate heat pump made by Minotair Ventilation.

Each of the 24 units has its own pump, which uses refrigerant and electricity to pull heat out of the air, even when it’s well below freezing. To maximize the efficiency of the units, the incoming air is preheated by passing through a ceramic device that captures heat from the air expelled outside.

The pumps, which are made in the Ottawa area, also contain electric heating coils that can kick on if the temperature plunges well below zero, when the efficiency of the pump drops off. Though less efficient, such coils are expected to be needed infrequently, Lovinsky said.

Unlike some popular ductless heat pumps that blow into a single room, the Minotair system connects to silver ducts running into the ceiling and then directs warm air directly into each room.

If the power fails, the building is so well insulated that it should stay warm enough for up to three days before an auxiliary source such as a generator would be needed, he said. Hot water is provided by two large electric heat-pump water heaters, with a traditional electric water heater as a backup.

Lovinsky is visibly proud of the building, teeming last week with workers installing siding, electric appliances and flooring as they raced toward a fall opening. Income-eligible tenants will pay between $650 and $1,000 per month for studios to two-bedroom units.

Utilities will be included in the rent, meaning the organization will be motivated to keep a close eye on its electric bill and the building’s energy performance, Lovinsky said.

Over in Colchester, the Stuart Avenue project is just getting rolling. When Gov. Scott showed up for a groundbreaking in May, there was little more than a concrete foundation, but work has since taken off. Construction is expected to be completed by spring of 2023.

The 36 units in the four-story building will include two- and three-bedroom units, a rarity in the affordable housing world, as well as a few units set aside for people who used to be homeless.

Evernorth would happily build an all-electric building if funding and space for more solar panels were available, Beyer said.

Efficiency Vermont provides financial incentives of $2,700 per unit on projects that exceed state building code for efficiency, but none for solar panels, she noted.

There is also a benefit to sticking with a tried-and-true technology, Beyer said.

“That natural gas boiler is just a workhorse,” she said. “We’ve got a lot of history with them. We know how long they last. We know how to maintain them.”

That said, if heating the building with a fossil fuel is no longer cost-effective or socially acceptable, a new system could be installed down the road. The highly insulated shell will serve the building well, whatever the heating source, Beyer said.